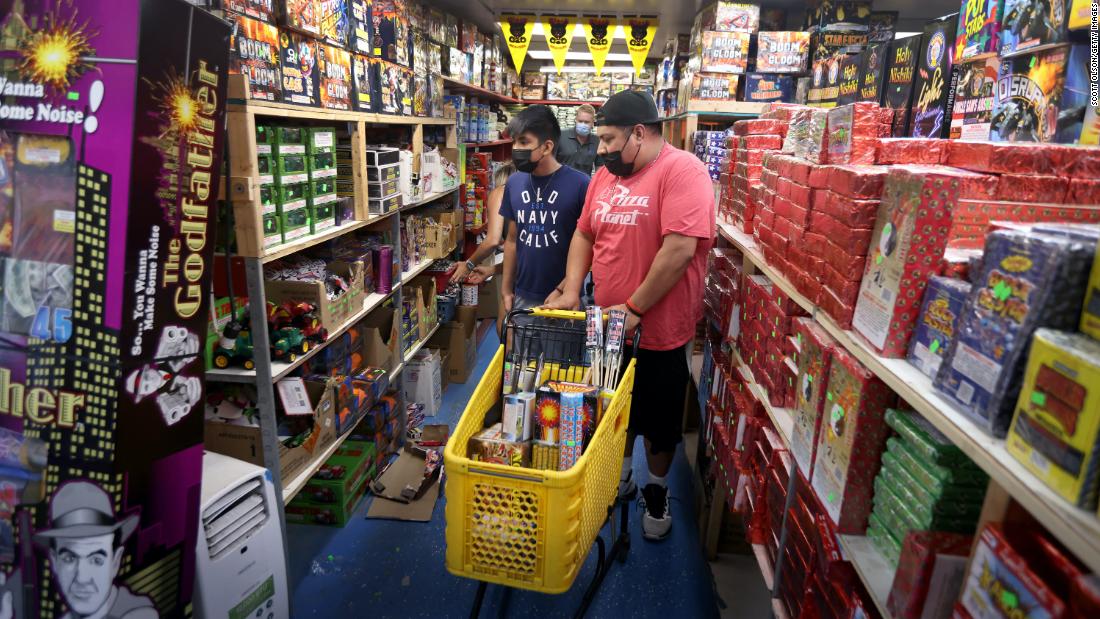 Fireworks Tips for a Safe Celebration of July 4th

The United States saw a 50% increase in fireworks related injuries and deaths from 2019 to 2020, according to a report of the United States Consumer Product Safety Commission.

Last year, the pandemic forced the cancellation of many commercial fireworks displays, said Patty Davis, deputy director of communications and press secretary at the US CPSC.

The canceled shows “may have prompted consumers to use fireworks themselves,” Davis speculated.

Fireworks aimed at consumers are safe when the proper safety protocols are followed, she added.

It’s important to plan your fireworks activities in advance and to have a sober adult in charge, said Julie Heckman, executive director of the American Pyrotechnics Association.

In 2020, 44% of people who died from fireworks-related injuries had used alcohol or drugs before the incident, according to the US CPSC.

When you light fireworks, place them on a flat surface and walk away quickly once they are lit, Davis said. Then soak the fireworks with water.

“Never try to relight or handle faulty fireworks,” she said. Instead, soak them in water as usual, Davis added.

Hands and fingers were the most injured body parts in both years and accounted for 30% of fireworks injuries in 2020, according to the US CPSC report.

“Sparklers burn as hot as a blowtorch at 2,000 degrees Fahrenheit (1,093 degrees Celsius), and that’s enough to burn some metals,” she said.

Spark injuries accounted for 900 fireworks-related emergency room visits in 2020, just behind firecrackers with 1,600 visits, according to the US CPSC report.

It’s also courteous to let your neighbors know when you set off fireworks, Heckman said.

“Let them know about your planned fireworks activities, especially families with young children or pets, or veterans who may be suffering from PTSD, as the sound of fireworks can be surprising,” she declared.

Americans should avoid buying illegal fireworks, such as fireworks sold by unauthorized sellers, and setting off commercial fireworks as consumers, Heckman said.

“The public should avoid any pyrotechnic device offered for sale in brown paper packaging without warning labels and instructions for use,” she noted.

American fireworks, a fireworks company in Hudson, Ohio, was one of several stores in the United States selling fireworks on July 4, 2020.

Fireworks shops that sell year-round like to sit around 30% in stock after the holidays, co-owner John Sorgi said, so he was surprised when they sold out around 10 p.m. on the 4th.

To prepare for another potential increase in sales, Sorgi said his company ordered 150% more fireworks than usual.

“Honestly, I thought it was going to calm down a bit, but sales were pretty much on par with last year,” Sorgi said.

Almost all consumer fireworks in the United States are made and shipped from China, and supply chain delays from the pandemic mean fireworks companies only receive about 70% of the money. their products, he said.

Sorgi expects delayed shipments to arrive around two weeks after July 4, which he says is acceptable for his year-round store, but could hurt seasonal stores that only open a few weeks before. holidays.

States like Texas have sales seasons in which fireworks retailers are allowed to sell the sparkling explosives, Sorgi explained. For Independence Day, Texas stores may sell fireworks from June 24 through July 4 at midnight, according to the Texas State Fire Marshal.

Fortunately, the fireworks don’t expire, so they can be sold during future sales periods, Sorgi said.

Retailers aren’t the only ones who have to follow specific fireworks regulations.

Fireworks laws can differ depending on the county or city in which they are used or sold, so people should research what the rules are in their particular field, Davis said.

In Ohio, for example, consumers can buy fireworks but not set them off, Sorgi said. Fireworks have been banned altogether in some areas due to the relentless drought in the western United States.
The American Pyrotechnics Association has a state-by-state guide regulations that consumers can refer to, but people should always check with their local governments for the latest information.