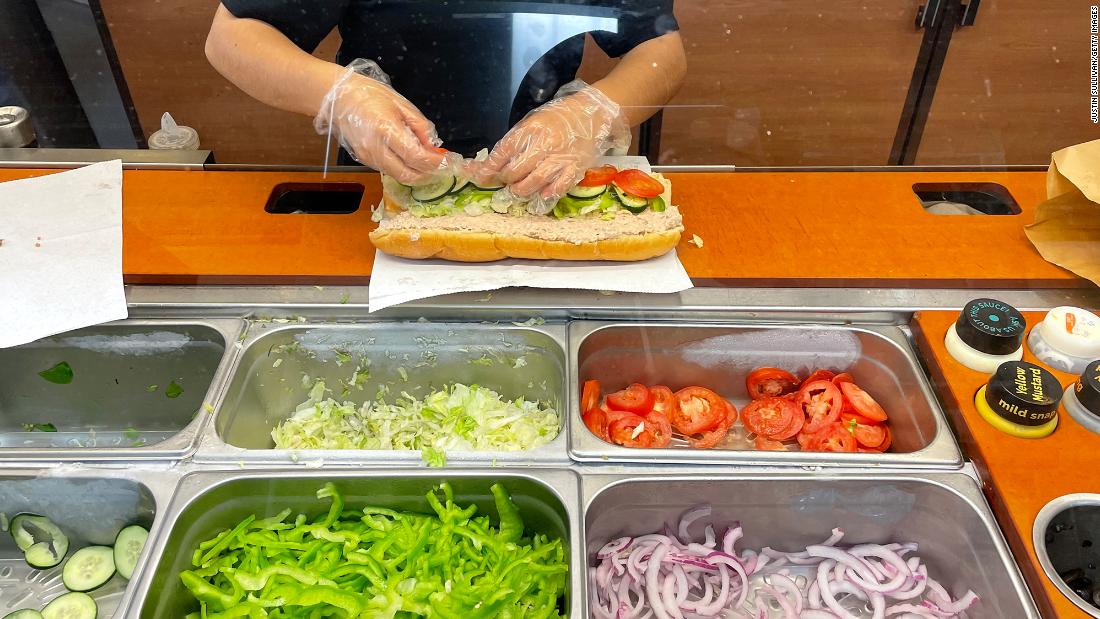 Subway CEO: We changed everything except our tuna

CEO John Chidsey says customers are looking for fresh ingredients and healthy options. It’s something people used to come to Subway for, but the competition has taken customers away over the years. It doesn’t help: a controversy over the reality of Subway’s tuna.

Julia Chatterley of First Move spoke to Chidsey on Thursday.

Explain the differences that consumers will see.

Chidsey: When our new team arrived as a group over the last year and a half or so, we obviously did a lot of consumer research. We went out and talked to a lot of our franchisees. And the only thing the two groups were really looking for was food innovation – the brand hasn’t had a lot of food innovation in the last five or six years – looking for slightly more desirable foods. We got to work over the last 15 or 16 months, really working on our basic ingredients – improving our turkey, improving our ham, our new bread products, mashed avocado, a lot of the basic ingredients. different. Between the new sandwiches and the commodity upgrades, there are about 20 new things that we’re going to be showing to our customers or consumers, so this really is the biggest refresh in the brand’s history in 56 years. .

It’s a very innovative industry and you have to constantly refresh yourself to stay fresh, so to speak, and what we really want to do is demonstrate to our customers and consumers that Subway is back at the top of its game. ‘innovation.

So we are talking about better quality ingredients. Will this translate into higher prices?

Chidsey: Considering our footprint and the size of our scale, we’ve been working on it for 15-16 months, and we’re working really hard to make up for all of those costs with packaging changes and other things that we’ve done, we have so could do it on a cost neutral basis – that’s what we thought. As you point out, with rising inflation, the entire fast food industry is obviously facing price pressure. And while we don’t yet know how transient or permanent it is, it is obvious that if it continues at a sustained and consistent level, you will inevitably see some of it spill over to the consumer.

Can you give us an idea of ​​how much?

Chidsey: No. At this point, it’s far too early. It’s a challenge, but we’re a bit isolated, at least in the short term, because of this big brand refresh. As an example, today we offer 1 million free six-inch submarines in the United States. Knowing how important this relaunch was, we pre-ordered as much food and protein as possible, so we’re somewhat isolated. But obviously we’ll go over that, and again, over time, we’ll determine how permanent these cost increases are.

There was a report that went around like wildfire suggesting that your tuna products do not contain tuna. I believe the suit has now been changed to say that it is not made from 100% tuna as it does not always use skipjack or yellowfin tuna. What’s the Deal with Subway Tuna? Can you just enlighten us?

Chidsey: I’m really glad you asked that question. The amended complaint to be corrected now says it is 100% tuna. They wonder what kind of tuna that is. But they recognize it’s 100% tuna. This is not the real problem. I say follow the science, and if you follow the science, once the tuna is cooked its DNA denatures itself, which means when you go to test it you can’t tell one way or the other. We have a website called subwaytunafacts.com. It will guide you through all of science. You can see every part of the story there, and I think that will obviously highlight the facts and clarify all those misconceptions. The last thing I would like to point out is once again that we have been working on this refresh for 15-16 months and the only thing we didn’t touch was our tuna. We worked on the turkey. We worked the ham. We worked on chicken. We worked the steak. People love our tuna. We’re very proud of our tuna, so I think that’s really the end of the story.

What do you hear from franchisees about the challenges they face?

Chidsey: Contactless pickup and delivery was more important to us as we don’t have a drive-thru like Burger King or McDonald’s. Despite this, we’ve seen a 217% increase in digital sales since 2019. Our third-party delivery sales have increased 260%, so we’ve improved our digital experience and we’re really trying to motivate consumers in that way. So I would say that Covid was actually an accelerator to push the business to where it was already heading. The franchisees are therefore very happy and think about the investments we are making in this space. The other thing I would say – not just in the US but in Europe, Asia, and other parts of the world – in the first six months of the year, the whole brand has been positive. If you look – positive not only against 2020 but against 2019. The brand has started to do well over the last six months, so I’m encouraged by what we’ve seen in the US and more importantly around the world.

Challenges in hiring for your franchisees?

Chidsey: Yes. It’s a struggle in the United States, that’s for sure. It is also a global struggle, as you know. The only advantage we have over our restaurant’s footprint is that we have a much smaller footprint so we need less manpower than others. And one of the things we did knowing we had this refresh was coming up: we went out ahead in May on our digital app and went to great lengths to hire, and we were able to hire around 40. 000 people in that time, which has helped. Work has always been a big problem and it is one of the times when we have to make our way.

Are you eating your tuna?

Chidsey: I absolutely do. This is one of my two favorite sandwiches.

What is the other one?

Chidsey: Turkey Cali Fresh. I know it looks like a shameless plug but it’s one of my favorites.

WCS beats the rain and returns to the race | Archives