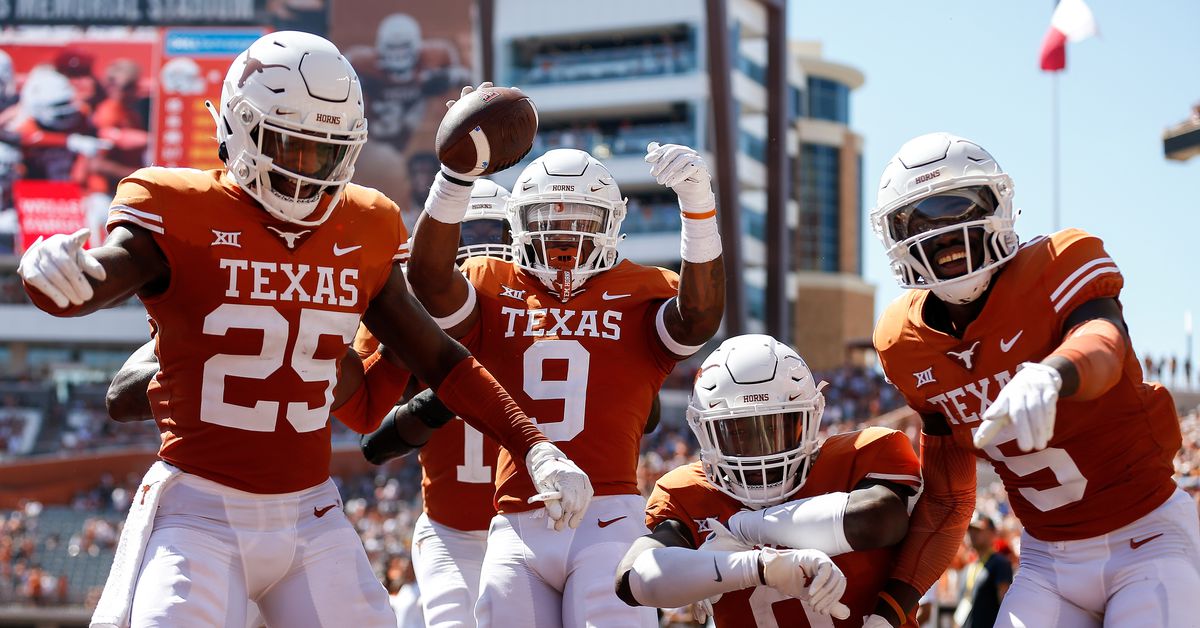 Every year there’s usually a two to three game streak – sometimes more – that you can circle around and say that will define the season. Last year it was TCU and Oklahoma games, in which Texas went from 0-2 to 2-2. This stretch effectively marked the beginning of the end for Tom Herman with the Horns, and thus opened the door to the Steve Sarkisian era.

Now that defining stretch is about to begin for Sark and his first team of Longhorns, and familiarly begins with the Horned Frogs and Sooners. Only this time it’s not a two to three game streak. Considering how the first third of the season has unfolded with a few Big 12 enemies enjoying quick starts, Texas are facing a five-game streak that could see the Longhorns emerge as the Big 12 leader. , collapse completely, or whatever it is in between.

So, in short, what happens between now and early November could very well define Year 1 of the Steve Sarkissian era.

We could easily jump into Texas, escape that streak with just one loss, or maybe even run the table to enter the final quarter of the season in the Big 12 driver’s seat at 8-1 (6-0 ) given their impressive ‘I watched in everything but the loss to Arkansas. What happens on Saturday in Fort Worth, where Texas haven’t won since 2013 – and have won only one game against TCU since then – could easily shift expectations in another, less optimistic direction.

So at first glance, Texas could emerge as a legitimate Big 12 contender, or even the frontrunner, by early November, and that alone will be an indicator of the success of Sark’s first season.

But it won’t be the only one.

What is perhaps more important during this five-game glove is how Texas reacts.

Two weeks, two resounding wins, and now it’s time for Texas to react to win again, and they’ll have to do it against a team that has dominated the Longhorns since joining the Big 12.

Then, whether they win or lose, they’ll have to react immediately again with the No.6 Sooners waiting at the Cotton Bowl the following weekend for what is usually the bigger game of the two programs.

And again, Texas will have to respond.

With a win, how will Sark’s team react to the predictable praise they’ll start to hear as Big 12 leaders with all of the seasoning left? With a loss, how far can Texas bounce back from a high-emotional rivalry game with a currently undefeated Oklahoma State team waiting to meet them in Austin the following weekend?

Then, after a timely week off, as good, average or disappointing as their record is, Texas will, once again, have to respond with a two-game road trip to No.19 Baylor and then to Iowa State to crown. the difficult five. stretching of the game.

Of course, Texas won’t be crowned Big 12 champions if they come out of that streak at 8-1 (5-1), and they won’t necessarily be taken out of this opportunity if they give up a game or two. An entire quarter of the season will remain when Texas return from Ames on November 6, but when they do, we’ll have a great idea of ​​what this team is and ultimately becomes in the opening campaign of the Sarkissian era. .

How will Texas react if they continue to improve and excel, winning game after game along the way? If they catch another haymaker loss like they did in Fayetteville, how does Sark’s team fight back this time around with increased competition? Also, how well will an attack that has been among the best in the country fare when it has to produce in a shootout, or when a defense throws its own punches and things don’t go so easily? What does Pete Kwiatkowski’s defense look like when they’re not playing with a huge cushion and need to find key saves to keep Texas in the game?

By early November, we’ll see just about everything. Texas will be tested. They’ll win a few games and maybe drop a game or two or maybe even more.

If the Longhorns can respond well, to both success and speed bumps, they’ll have a chance to do in Sark’s first season what Tom Herman has only done once – compete for a Big 12 title.

“A game doesn’t earn you a Big 12 Championship,” Sarkisian said. “This is a set of works that we must continue to put in place. We have challenges to face and the most important is [this week] go up to TCU.