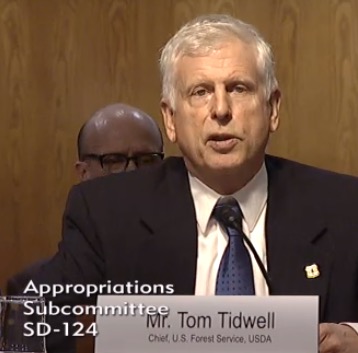 Tom Tidwell, head of the US Forest Service, recently discussed the 2016 wildfire season in two locations. Earlier this month, he testified before the Senate Appropriations Committee, and on Wednesday he spoke with the Associated Press while in Denver for a conference on forest health.

Here are some excerpts from the AP article, and below we have information on the committee’s testimony.

The next wildfire season across the United States isn’t expected to be as bad as the hells of last year, when a record 15,800 square miles burned down, the top national official said on Wednesday. fighting forest fires.

But parts of the country should expect a difficult season after a hot, dry winter or because of a long-term drought, said U.S. Forest Service chief Tom Tidwell.

Southern California, other parts of the southwest, Alaska and Montana are all vulnerable, he said.

“So where we expect the severity of the fire season will not be at the same level as last year, we still expect some areas to be really active,” Tidwell said.

The overall wildfire bill, including prevention programs and the cost of putting crews, equipment and planes on the line, consumes a growing share of the Forest Service’s budget. This has forced cuts to forestry research, campground and trail maintenance and other areas, Tidwell said.

The Obama administration has pressured Congress to pay the cost of fighting the worst fires out of natural disaster funds, rather than the Forest Service budget. Tidwell said that the larger 1 or 2 percent of wildfires account for about 30 percent of the costs.

Congress did not agree to the change, but approved an additional $ 520 million to fight the fires this season, Tidwell said.

With a chuckle and a smile, Tidwell defended Smokey Bear, his agency’s memorable mascot, against claims that things got worse by portraying fire as an evil instead of part of the natural cycle that maintains forests. in good health. Smokey’s original post, “Only You Can Prevent Forest Fires”, has been updated to “Only You Can Prevent Forest Fires”.

“Really, Smokey was just talking about these man-made fires that actually happen at the wrong time of year, not where natural fire does,” Tidwell said. These are the fires the Forest Service always wants to stop, he said.

“Smokey Bear is not to blame for the situation we are in today,” he said.

On April 6, before the Senate Appropriations Committee, Chief Tidwell discussed many different responsibilities of the USFS. In his opening remarks, he summed up the forest fires at 38:50 in the video. (I was unable to play the video using the Chrome browser, but it worked with Firefox. It probably has something to do with the government using Flash to deliver the video, a very hated and insecure.)

The budget request will also provide the level of fire suppression resources that are needed to be able to protect not only national forests, but also to provide support to states and our local firefighters. We’ll have the right number of big tankers this year, we’ll have the helicopters, the hot-fire teams that we need to be able to continue to provide that support as we work with our states and local fires.

Later in the hearing, at 1:07:01 in the video, New Mexico Senator Tom Udall raised the issue of fire loans, taking money from non-fire accounts to pay extinguishing fires when fire funds are exhausted during an intense fire. season. The senator mentioned the chief’s boss, Tom Vilsack, secretary of the Department of Agriculture. The secretary had apparently said the funds would not be taken from accounts other than the fires to pay for the removal.

Secretary Vilsack has expressed his disappointment very publicly at not having successfully adjusted the disaster cap. He said for the record that he would not allow transfers for fire suppression. He said this most recently at the farm credit hearing last month. It basically prohibits the normal practice of fire borrowing, as you know. As I said in my opening remarks, I share the secretary’s frustration that we do not have a cap adjustment in law yet and I hope this is the year when we can adopt a solution for the firefighting budget. But until that happens, we need to be clear. We expect the Forest Service to use all of its existing legal authority to deal with catastrophic forest fires. Chief Tidwell, can you assure us that when the time comes, the agency will use all available tools to protect the public and the nation’s resources from wildfires.

Senator, we will continue to assume our responsibilities on the ground in order to be able to protect communities regardless of the budget. I share the secretary’s urgency and as I shared with the chairman earlier, the more this issue advances, the less leeway you have to resolve it … We will continue to work with the committee, and I am hopeful that until ‘Now with the projections we should be okay with the level of additional funding you have provided. But as the season progresses, we will definitely have some discussions going on to let the Committee know where we are now with the spending rate so that we can hopefully avoid this situation of lack of money for the fire suppression this year.

The statement on protecting communities “no matter the budget” reminded me of an article we published on April 25, when Jerry Williams, the former USFS fire and aviation director, in 1995 was speaking. to be able to do, do, and tragedy.

After the discussion on the fire loan, at 1:09:05 in the video, Senator Udall asked about the plans for the use of the seven HC-130H planes which in 2013 began the process of transferring the Coast Guard at the USFS. They will become the first tankers owned by the government or operated by a federal government subcontractor in the United States. All benefit from scheduled maintenance in depot and will need to have retarder delivery systems installed in addition to the new paint. Most of them will also have replaced the wing boxes, a process that takes around 10 months and around $ 7 million per plane.

In the meantime, this year, like last year, there will be an HC-130H available for firefighting based at McClellan Air Field near Sacramento. It will use a borrowed Modular Airborne Fire Fighting System (MAFFS), as the Air Force, responsible for the maintenance and modernization of the seven planes, has not yet made arrangements to install the tanks. permanent self-timer.

Chief Tidwell told the Committee that he expects the seven HC-130H tankers to be operational according to the following schedule: