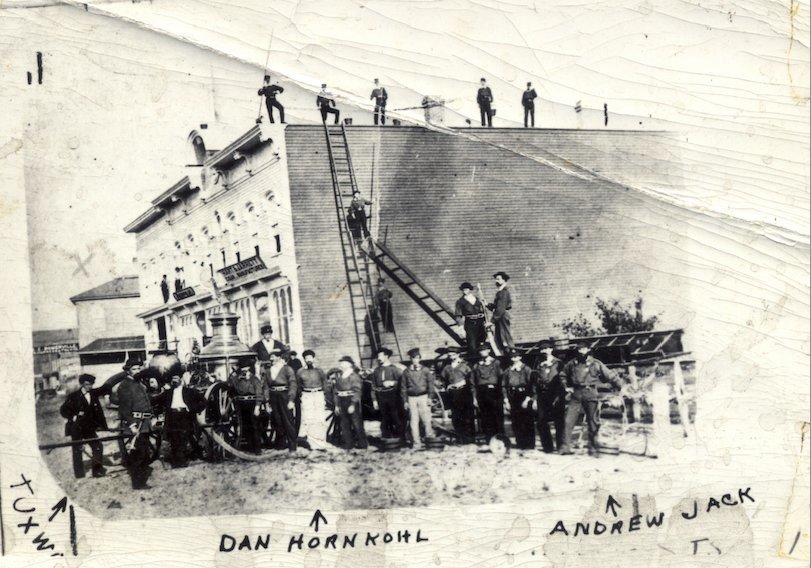 What happened in this 150-year-old photo of downtown Manistee

EDITOR’S NOTE: In October 1871, fires spread to various cities in the Midwest, in turn destroying much of those cities including Chicago, Peshtigo, Urbana, Port Huron, Holland Manistee, and others. Friday marks the 150th anniversary of the Great Fire of 1871. The following article is part one of a three part series commemorating the 150th anniversary of what has been called the Great Fire of Manistee. The second part of the three-part series will continue in Friday’s edition and examine how the fire spread throughout the city.

The photograph accompanying this column is one of those photographs in which I have never been particularly interested. In fact, I am a little ashamed that until the last few years it is usually found at the bottom of the drawer where the museum keeps. part of the photographs relating to commercial buildings.

By the way, for those who are curious, said drawer is simply labeled “Buildings”.

Is it because of the order in which the photo was originally found that kept it at the bottom of the pile? Or maybe it was a reverse order of large to small photographs (it’s only 3.5 inches by 5 inches) that kept them in the back of the drawer? Maybe it was both? Regardless of these philosophical dilemmas, as I was sorting through the photos looking for something else, I stumbled across the photo, analyzed the faces and that cute fire truck for about a minute while thinking, “Cool photo” or something. something so indescribable and being in my way with everything I was originally looking for.

Yet when dealing with history, there are times when you get a piece of history at one point and later, maybe years later, you get another piece – or pieces. – of the overall story and in the process you may be able to connect them.

Having said that, after years of looking at this “cool photo”, which had a few names identifying some of the people, but nothing more than a location scribbled on the back, I later came across an article in a 1905 issue. from the Manistee Daily News depicting a photograph of a fire engine and firefighters standing in and around a building near the corner of Maple and River Streets.

When I remembered this little photo in the “Buildings” drawer, it was only then that I understood the importance it has for the history of Manistee because, according to the Daily News, it was taken shortly before the Great Fire of 1871 making this in turn one of the oldest known photos of the city.

That said, the previously mentioned article first appeared in the Manistee Daily News on January 5, 1905. Throughout the article, parentheses indicate where various buildings are located today:

“In the window of the JE Somerville store (located at 405 River Street in 1905, the area is now a parking lot) is displayed an image of Manistee from a long time ago, which contains a lot of interest to people whose memories go back to the ‘big fire.’ In fact, it is one of the few paintings to have survived the 1871 fire.

“It was taken a few weeks before the fire. The camera was planted on River Street almost in front of the store where the print is now on display. The view shows the first team of firefighters grouped proudly around their new steam fire engine. In the background is the wooden building that stood on the current site of Hall and Bradford stores (now Manistee Beverage Co.), and in the distance, where Ramsdell Block is now located (now Ramsdell Inn / TJ’s Pub), appears the sign above the door of the harness store belonging to Mr. Somerville’s father.

“Several men still living in Manistee are represented in the fire team. There’s Andrew Jack, who has recorded the photo every year since, and Daniel Hornkohl (shown in the photo wearing white pants in the center of the photo) who had more fun going to the fire than the other men in the city, and Frank Pettigrove and a few others. But only an old inhabitant can spot the survivors among the young firefighters in the photo, because time has changed since then. Beards have grown into long, straight, sturdy figures or something curvy.

The article goes on to provide a brief description of the Great Fire of 1871 along with the firefighters who fought it and the engine they used to try to put out the blaze:

“Just weeks after the fire crew made their cheerful appearance on River Street, a test of their courage and endurance was given. The city was surrounded on all sides by fire. The shiny new liner was withdrawn, and for a long time it played its part in the valiant struggle against the irresistible forces of nature. Finally, after fighting the fire near the mouth of the river for hours, he was brought back to the residences section in an effort to prevent the fire from passing through the center of town.

“A booth was set up on Maple Street near the corner of Third and there the old machine fought a fight of life and death. The fire spread. The horses were let loose so they could save themselves, and eventually, abandoned by his crew, the brave old engine, still sniffing defiantly through the funnel and safety valve, fell victim to its natural enemy.

“After the fire the engine was salvaged, cleaned, repaired and for a number of years was the primary resource in the local firefighting.”

Looking at the photo now, it’s hard to believe I brushed it off the way I did. Still, it shows how sometimes pieces from the past will end up making sense even if you have to wait several years for it to happen.

In any case, a nice photo indeed.

Mark Fedder is the Executive Director of the Manistee County Historical Museum. He can be reached by email at [email protected], or by phone at 231-723-5531.

MORE FROM THE MUSEUM ARCHIVES

• The story of the Manistee Estelle sinking

• This Manistee man did everything